Huge Progress in the Shed!

Over the last two weeks (I'm on Annual Leave), I have been taking the time to tidy up my shed. Its been a bit of a disaster and I have been too stuck to do much about it.

I listened to a back episode of the RCR Podcast about Hoard vs Private Collection vs Museum. I always wanted the latter, but it sometimes resembled the former.

I have struggled since 1997 to not just collect everything. While that has actually benefited my collection, I have gotten rid of many systems.

I have essentially cut down to -
- Commodore 8 bit line (really all NON Amiga Commodores)
- Atari 8 bit line
- Apple everything
- IBM Everything up to the AT
- Random assortment of odds and sods like DEC Rainbow, Professional 350, VAXMate, couple of MicroVaxes
- All consoles up to PS2

And while that sounds like a cut down, I have still a large collection. I have removed a heap of equipment and manuals from my collection that were just simply being hoarded. I had no intention of reading them - they were just taking up space. A couple of machines and parts have been sold and a few more are about to go.

Whats great is it gives you such relief when you can actually use the workbenches and things are not on the floor. The main section of my shed now looks like this - no obstacles on the floor - generally tidy and workable. 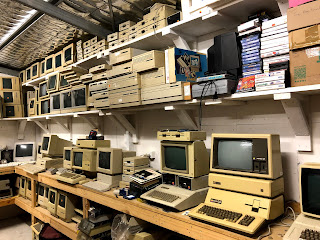 My "office" and repair area is much more organised - I have installed shelving and tidied up the area - there is still work to do as I am still removing things from the shed but it give you an idea of where I am heading. 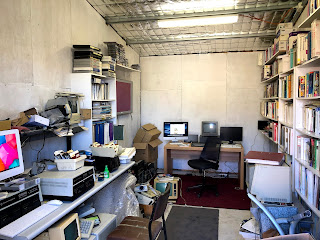 My dreaded back table is now just an enormous pile of disks that need to be categorised - and it already has had a quick first chop and 25% has already been sorted and removed from this area. 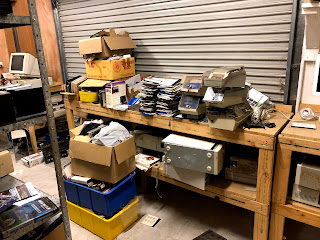 So I have been giving myself a break and doing some of the stuff I have wanted to do for a long time. Namely - get my PETs working and backup all my PET software. To do this I have been using ZoomFloppy on a Windows 10 PC using OpenCBM and CBM Transfer software. This works OK, but backing up a 8050 or 8250 disk takes around 45 minutes. So I have plenty of time to do other things while that is happening. 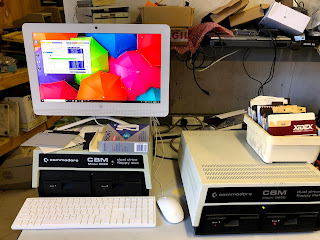 I have also been solving my PET problems using the wonderful PET Diagnostics by Tynemouth Software. This thing is fabulous - identifying what is right and wrong with my PETs. Makes it real simple to figure out what needs to be done. 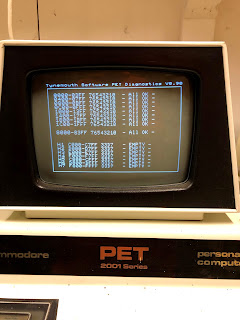 This PET has ROMs installed. I guess they are dead! 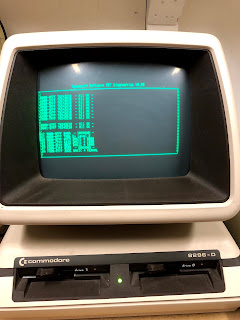 This 8296D tests OK but has a boot problem. As the PET Diagnostics chip is a 6502 replacement, I'll have to try testing with a known working 6502.

So yes - I have been having a bit of fun. Lots of work to do but plenty of challenges.